At the big event stream CoD Next the new Battle Royale Call of Duty: Warzone 2.0 was presented. Over 200 streamers were present and were able to collect their first kills in the game. While many participants of the event were enthusiastic about the new Warzone, the viewers remained rather divided.

What is there to know about the new Warzone? Call of Duty: Warzone 2.0 will be released on November 16, 2022 along with the first live season of Modern Warfare 2. The first map is called Al Mazrah: 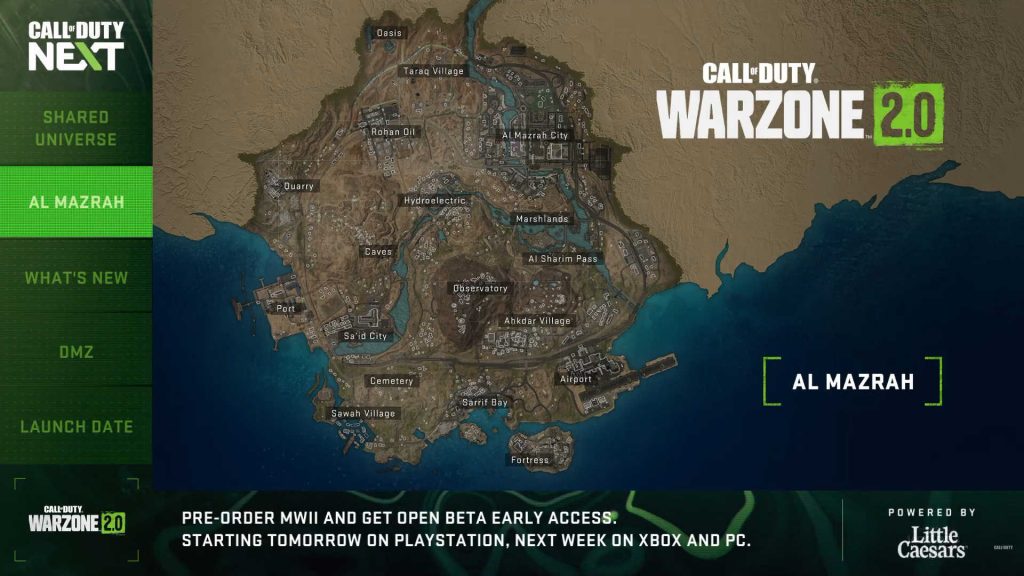 Compared to the first Warzone, a lot of things are changing, the gameplay will be significantly different. Here are a few of the most important changes:

First gameplay on the CoD Next inspires streamers

Call of Duty invited over 200 streamers to CoD Next, who were able to play their first rounds in Warzone 2.0. The atmosphere at the event was very relaxed and many streamers were enthusiastic about the first rounds.

Victories were strongly cheered and hardly anyone found fault with the extensive changes. As an example we include a video from the German content creator and Warzone streamer “AimBrot”.

For the streamer, the new Battle Royale feels more fluid, less “clunky” than its predecessor, that is, more modern and technically advanced.

In addition, he praised the better technology due to a more stable frame rate. At the end of the video he also talks about the map and finds that Al Mazrah – “from the feeling so much better and nicer than Caldera”.

However, AimBrot also has criticism and wishes the loadout crates were back. For him, it was a fundamental gameplay element of Warzone and something that made the game.

Looking at some of the content creators who were on site, however, most are looking forward to getting their hands on Warzone 2.0 at release.

A somewhat different picture emerges on Reddit and Twitter, among the players who have not yet had a hand in the game. Many are skeptical because of the extensive changes compared to the predecessor. Not everyone likes the map either.

While the most popular thread in the Warzone subreddit is the introduction of the map (2,300 upvotes / September 16, 07:00), there is a lot of criticism of the design (via reddit.com).

The most popular comment in the thread comes from user “alex1596”: “Oh god no, not another giant hill in the middle”. He is referring to the “Peak” location of Caldera – a huge volcano in the middle of the map with a lot of influence on the dynamics of a match.

The missing loadout drops are also hotly debated. The Reddit thread about it comes to 1,200 upvotes and collected over 500 comments in a few hours (via reddit.com). The most popular comment here: “They will bring them back if people don’t feel that” by No_Bar6825.

Opinions also differ under a tweet from Warzone expert “JGOD”. JGOD asks, “What do you think about Warzone 2.0?”.

He himself is still unsure about it, and the commentators are also split. Some are convinced at first sight, others are bothered by the drastic changes to the predecessor.

Many also don’t want to commit themselves until they’ve been able to take a spin themselves.

What’s your first impression of the new Warzone? Leave a comment below. If you’d rather check out the other CoD Next announcements, check out here: CoD Next shows MW2 multiplayer, Warzone 2.0 and Warzone Mobile – All announcements of the mega event at a glance. Highrise, Terminal and Co. are rumored to return in Modern Warfare 2 One Reply to “CoD Warzone 2.0 shows release date and map”